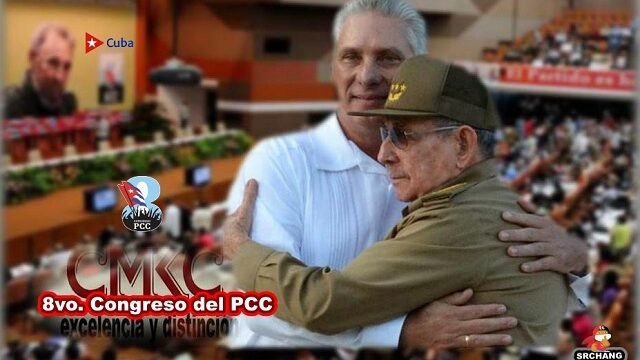 Image: Santiago Romero Chang.
Congress,- With the presence of Political Bureau members, Army General Raúl Castro Ruz, first secretary of the Central Committee; José Ramón Machado Ventura, second secretary; and Miguel Díaz-Canel Bermúdez, President of the Republic; among other leaders of the Party and government, the 8th Party Congress, began today in the capital’s Palacio de Convenciones, and will continue through April 19.

Congress- Opening today, on the 60th anniversary of the proclamation of the socialist character of the Revolution by Comandante en jefe Fidel Castro Ruz, Cuba, in the voice of Party militants, will once again reaffirm the irrevocability of its emancipatory work and, as expressed in the Congress call, reiterate before the world its «intransigent conviction of victory.»

Congress- After the opening remarks, delivered by José Ramón Machado Ventura, delegates approved documents that will govern the conclave and subsequently, the Army General began presentation of the 8th Congress Central Report.

Thus begin four days of intense debates and the search for solutions, in accordance with the thinking of the people who inspire and deserve them, with no other commitment than to rise to the occasion, to continue the defense of what has been accomplished and to set foot on the path of more conquests.

Congress- Included on the agenda to be considered are the updating of the Conceptualization of the Cuban economic and social model of socialist development; the implementation of the Guidelines of the Economic and Social Policy of the Party and the Revolution; the socio-economic results obtained since the 7th Congress; the functioning of the Party, its ties with the population; Party ideological activity; and examination of the cadre policy.

“To dream and continue a country: today begins our #8thCongresoPCC, #CongresoDeLaContinuidad. Here ideas are strengthened, history is recognized and we talk about the future. #SomosCuba #SomosContinuidad pic.twitter.com/yol95Fz67n”

Continuity is the watchword of this meeting, which means more the natural process of transition from one generation to another, to become a perennial certainty that socialist Cuba is on the go, today and for all the years to come.

“Presided by Army General Raúl Castro Ruz, First Secretary of the Central Committee of the Communist Party of Cuba, was inaugurated a few moments ago at the Convention Palace in Havana, #Cuba, the #8thCongressPCC #CubaSocialist #SoñarYContinuar pic.twitter.com/E3LUnnInjd”.

Our Communist Party is unique