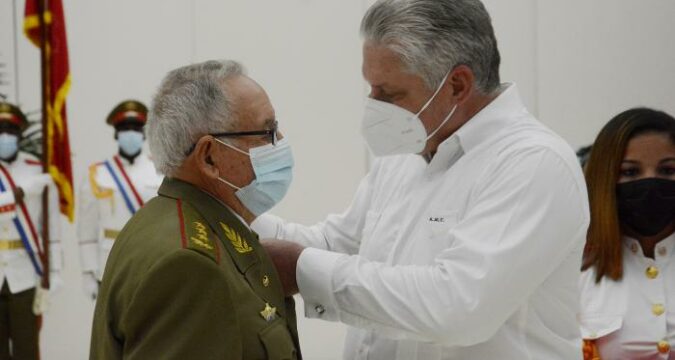 Cubans- The honorary title of Hero of Labor and other decorations were placed on the chests of men and women who have devoted their lives to the homeland, in a ceremony yesterday, presided by First Secretary of the Party Central Committee and President, Miguel Díaz-Canel Bermúdez

Cubans- «Your example has special significance, as the response of Cuban workers, laborers and professionals, fighting, thinking and working as a country, contributing decisively to the continuity of this beautiful revolutionary work,» stated José Antonio Pérez Pérez, member of the CTC (Federation of Cuban Workers) national secretariat.

At the proposal of the Minister of the Revolutionary Armed Forces (FAR) and CTC Secretary General, the President issued Decree no.237 granting the title of Hero of Labor of the Republic of Cuba to 13 compañeros, including a posthumous award to Vice Admiral Julio César Gandarilla, former Minister of the Interior. His widow Minerva Sarmiento accepted the title from Diaz-Canel.

Twelve workers were awarded the First Degree Lazaro Peña Order, from different unions and territories; while four former union leaders were granted the Third Degree Lazaro Peña Order and six health and science workers, members of the Henry Reeve International Contingent of Doctors Specialized in Situations of Disasters and Serious Epidemics, were honored with the Labor Achievement Medal.