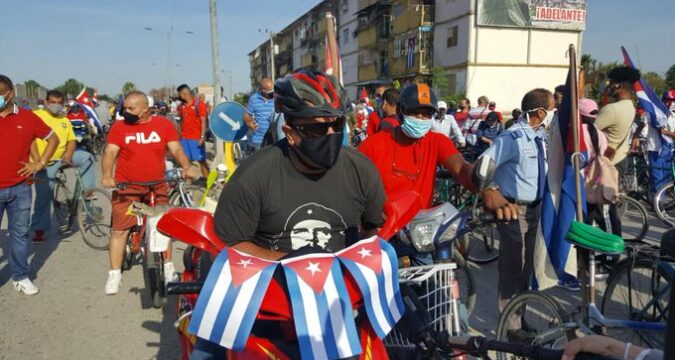 Cuba, May 8 (Prensa Latina) Edilberto Muñoz, a member of the Colombia Humana movement, condemned in Paris on Saturday the decision adopted by the Government of President Ivan Duque to expel a Cuban diplomat in the context of strongly repressed social protests in the South American country.

The social and political activist, who is living in France, told Prensa Latina that the new aggression against Cuba and the scenario of popular mobilizations against the consequences of neoliberalism in Colombia, aggravated by the Covid-19 pandemic, should not be seen as separate issues.

For Uribe’s party, the chaos that society is experiencing in my country is the fault of anyone, Venezuela, Cuba and even the entire world, because their representatives are not willing to assume the misfortunes for which they are responsible, he warned.

What would happen if the U.S. blockade did not exist?

According to Muñoz, what has happened in Colombia since late April is the result of imposing a tax reform, of the pensioners’ inability to pay, of unemployment and of the problems to have access to healthcare systems.

Those responsible are the creators of policies of greed and death, such as Law 100 promoted by Alvaro Uribe, drawn up during Cesar Gaviria’s administration, which put a price on health, he stressed.

What would happen if the U.S. blockade did not exist?

On Friday, Colombia announced the expulsion of the first secretary of the Cuban Embassy, Omar Rafael Garcia, who was accused of alleged ‘activities incompatible with the provisions of the Vienna Convention on Diplomatic Relations.’