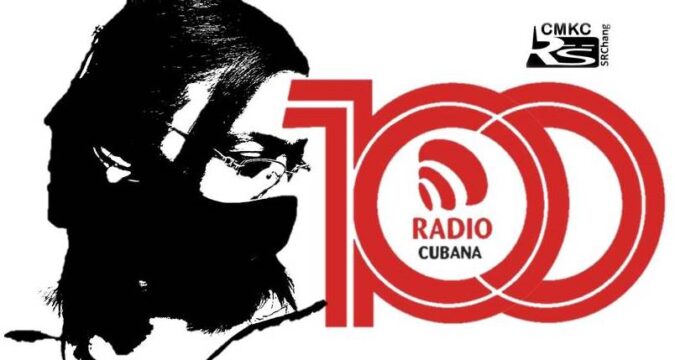 By Santiago Romero Chang
The celebration for the 100 years of Cuban Radio involves in Santiago the dramatic, informative and musical production in rescue of our roots, traditions and local identities; contribution of  CMKC that will turn 92 years old in the coming 2022.

The most recent research established the founding date of CMKC, March 23, 1930, and since then, the performance of a comedy show that provided fertile ground for innovation and imagination of the medium with evolutionary germs for the Latin American continent. A name emerged: Felix Benjamin Caignet, without him, it is impossible to reconstruct the history of this radio station, nor of radio in Cuba, or in the American continent.

After the announcement of the celebration for the 100th Anniversary of Cuban Radio, there was a time to recognize outstanding workers and departments in this 2021.

The highlight of the day was the Radio Master award to retired journalist Elvira Orozco.

The recognition to CMKC, Radio Revolucion on behalf of the provincial direction asserts the role of the friendly radio station, in the orientation, teaching, entertainment and informative update during the Covid-19 pandemic.

When the intervention of the other existing provincial station (CMKW) took place, its staff joined the CMKC staff and together they faced the plans to diversify the programming.

In the early stages, the old commercial radio structure was still maintained, limited only to music and news programs, but – gradually – work was done to radically transform it, starting to broadcast sports, dramatized and varied shows.

Encouraged by old actors and writers of Santiago’s radio, CMKC’s dramatic company was born in an incipient way. The station was nourished by original scripts and adaptations of writers such as José Soler Puig, Antonio Lloga Simon, Francisco Muñiz Mallorquín, Oscar Serra and others that were forged in the daily work with this group.

As programming developed, it extended its waves beyond the areas it covered at the triumph of the Revolution. In Victoria de las Tunas, the broadcasting equipment of the former Circuito Oriental was linked to the provincial network, and repeaters were placed in Baracoa, Cayo Mambi and Las Mercedes, and thus became into the station with the greatest broadcasting power in the former Oriente province.

But although it grew in better technological possibilities and programming, it was limited in the physical aspect, since it still remained in the old premises of 511 Aguilera Street on the second floor.

In April 1966, when a fire destroyed the modern building of the Aguilera Theater, lust a few meters from the CMKC studio, and fearing that the flames would reach there, the station was moved to the studio located on San Basilio Street between Reloj and Clarin Streets.

When hurricane Inés passed through the eastern provinces, which was followed from the la Gran Piedra radar by Commander in Chief Fidel Castro, who then visited the CMKC radio station in its new premises and warned the population of the imminent passage of the cyclone. On that occasion, the leader of the Revolution talked with the workers who were at the station and was interested in knowing the progress of the works to provide it with new studios and more modern equipment.

Years later, the technology was replaced by modern recording consoles and other equipment of Hungarian origin, which undoubtedly opened a new stage in CMKC’s radio production.

On March 13, 1968, on the occasion of a mass event to commemorate the anniversary of the attack on the presidential palace and the capture of Radio Reloj, our Commander in Chief announced what would be called the revolutionary offensive, by means of which the properties that remained in private hands were passed to the people. In accordance with these measures, almost all the radio stations in the country adopted a new line of work that included changing the names they had until then.

At the suggestion of the outstanding director Rolando González, and based on the tradition of the revolutionary struggles of the CMKC, it took the name of Radio Revolucion, at a time when the workers were in the heat of the activities in support of the agricultural work, mainly the sugar harvest. With this name it was -definitively- recognized in the Cuban radio broadcasting system.

59th Anniversary of the Cuban Radio and Television Institute, Motivation for CMKC

Santiago in Campaign for the 100th Anniversary of Radio in Cuba.

When at the beginning of the 20th century the first transmission by Hertz waves was made, an original form of communication between human beings emerged: Radio. In Cuba this fact began in Havana in August 1922, by the Mambi Lieutenant Luis Casas Romero.

In that same decade, the people of Santiago were able to know about the existence of the 8AX radio station, pioneer in the eastern territory in radio and initiator of a history full of relevant moments.

It was a period of experimentation thanks to the efforts of radio amateurs, who aired two or three hours of information and music in isolation, from different places in the city of Santiago de Cuba, without having the legal mechanisms to regulate the radio activity.

In 1923, the first licenses were granted to systematically operate 6 radio stations in the eastern part of the country, through the services of radio amateurs, since then and during the 30’s, the advertising mechanisms that supported the radio activity were consolidated.

The period propitiated the entry of numerous artists, writers and musicians who enriched the content of what was transmitted in the new radio stations, among which CMKC, Radio Oriente, stood out.

CMKC began its experimental transmissions in 1930, but was not officially recognized until 1923. Then, subject to commercial transactions and change of owners, the station was consolidated in a definite direction of work in the mid 40’s. During those years, Radio Oriente developed a programming mainly commercial and informative, aided by a valuable group of correspondents from the entire former Oriente province.

From that time until the present, the station was located in several places of the city, until 1961 when it was moved -definitely- to Aguilera 554.

On April 3, 1933, La Voz del Cauto went on the air in Palma Soriano, which went through names such as: Radio Valpin, Radio Palma and, finally, during the revolutionary period, Radio Baragua, its current name. Two years later, on July 5, 1935, the signals of CMKW- Circuito Oriental de Radio, today Radio Mambi, a radio station in the municipality of Santiago de Cuba, began to be broadcast.

The radio phenomenon also developed in other municipalities of the province such as San Luis and La Maya during the 40’s and 50’s, always with short duration transmissions.

In 1952 the first dramatic group of the Eastern Radio was completed in CMKC, with the participation of outstanding artists such as Jose Antonio Rodríguez, Enrique Almirante and Magali Alou.

It is precisely through CMKC that the father of the radio soap opera, Félix Benjamin Caignet, from San Luis, started the narration of children’s stories through the program «Buenas Tardes Muchachitos» (Good Afternoon, Kids), which gave Radio Comedia Infantil the nexus of continuity and introduced the episodic genre of which «Chelín y Bebita» is an example.

Transcendental moments marked the history of CMKC in the popular struggle against the governments in power. The station’s Noticiero (News) developed a systematic style of critical commentary against neocolonial politicking, even when the owners of the plant maintained an iron press censorship in favor of the rulers.

Several of the workers of the radio station were part of the 26th of July Movement and supported the efforts of the Rebel Army in the underground and in the mountains of the Sierra Maestra struggle, either with messages and revolutionary orientations to the people of heroic Santiago, or in the Armed Uprising as it happened on November 30th, 1956.

Some of these comrades received in the flesh the consequences of the machete plan, personal threats and the sadly famous Palmacristi (castor oil). For example the legendary operator Vistel Powell, a humble person, very dedicated and courageous until the last days of his life. How can we forget Gloria Cuadra, journalist and broadcaster, coordinator of the 26th of July Movement in CMKC, and Noel Pérez, broadcaster?

Near the revolutionary triumph, CMKC joined the Cadena de la Libertad (Liberty Network), headed by Radio Rebelde and broadcast the call for the General Strike on January 1, 1959, as it had done before, on April 9, 1958.

From the premises of our radio station, Commander in Chief Fidel Castro kept abreast of the development of the invasion from east to west. Thus, there remained the memories of the First Speech in Revolution, here in the central Cespedes Park, plus the pronouncements to the whole country as the call: «No coup d’état, because it would only prolong the war».

In the following years, CMKC would not go back on its word, both in the ruthless imperialist attacks against Cuba: the Bay of Pigs, the fight against bandits, etc., as well as in the hard years of the reconstruction of the nation, in the main economic and political tasks: Campaign for the Literacy, the 10 Million Harvest, the Voluntary Work Days in the construction of the first works such as the extension of Las Americas Avenue, the Versalles urban district, the New Vista Alegre neighborhood, the remodeling of the Antonio Maceo airport, the coffee harvest, the mobilizations for the defense, before strong cyclones like Flora, etc….

For several years the Provincial Direction of the Radio Santiago de Cuba was in the building of the CMKC until 1976, when the Executive Body for the nine municipalities of the province of Santiago de Cuba appeared in the house where the Mambi General Jose Maria Rodriguez (Mayia) lived, in 510 Aguilera Street, between Reloj and Clarin.

The radio tradition in eastern Cuba boomed with the triumph of the Revolution, this important means of communication did not escape the wave of transformations in which many of the radio stations were intervened and put at the service of the people.

In 1968 Radio Siboney went on the air, a radio station of light popular instrumental music, the only one of its kind outside the capital; its predecessor was Radio Valpin, which also transmitted commercial advertising on FM.

As from the political administrative division, the concepts of local community and participatory radio began to open up, based on the need for the radio message to respond more to the socio-political, geographical and economic environment of each municipality. For this reason, on March 11th, 1978, the rebel radio station of the Second Front, Radio 8SF, was rescued in Mayari Arriba, in the heart of the Sierra Cristal.

CMKC also had to readjust in 1980 to its provincial limits, both in terms of content and programming design, since its transmitters were put at the service of the nascent radio networks.

The comprehensive adjustments of radio programming continued in the province in the face of new and increasingly aggressive actions of U.S. imperialism. Radio Majaguabo, in San Luis, on July 5, 1982 and Radio Grito de Baire, in Contramaestre, on February 24th, 1990, both with 8 hours of transmission, appeared in the airwaves.

Based on the Havana experience, the municipal radio studios were created here in the 90’s.  Centers that played an essential role in the mobilization, organization and public agitation, even in the so-called zones of silence in the middle of the mountains.

These studios started the network with CMKC, both in direct telephone line and microwave system, and received their first journalists as founders-advisors such as: Juan Alberto Trujillo, Onel Caparros, Esteban Revilla, Santiago Romero, Orlando Ocaña, Orlando González, and Benigno Rodríguez, in short, a first wave that fostered and gave the first advances in community radio.

These new radio stations work between 4 and 6 hours of transmission with a fundamentally informative, recreational and social facilitation profile.

«CMKC, always by your side!»