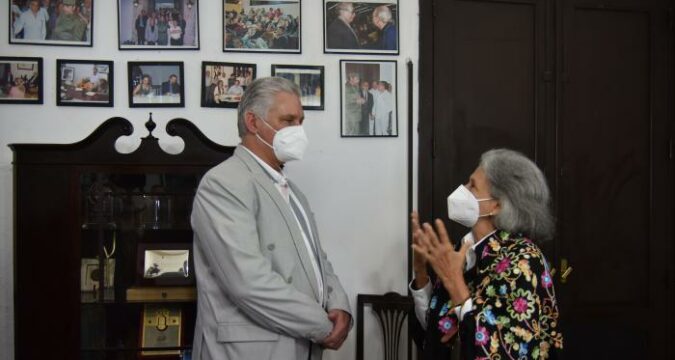 Díaz-Canel– The Palace of the Revolution, again on February 8, welcomed the twenty-some intellectuals and artists who every month meet with President of the Republic Miguel Díaz-Canel Bermúdez, to follow up on implementation of agreements reached at the IX Congress of the Union of Cuban Writers and Artists(Uneac), held at the end of 2019.

Díaz-Canel– Santiago on the Cuban Theater Day
By: Oscar Ignacio Ruano
Santiago welcomes the Day of Cuban Theater, an artistic expression that not only delights, teaches and enlightens; a scenic art very affected by the current resurgence of COVID-19 and that far from stopping, the theatrical manifestations continue virtually in StreamingCuba through social networks. Cuba commemorates the Cuban Theater Day as a tribute to the tragic events of the Villanueva Coliseum that took place 152 years ago, shortly after the beginning of the war of independence against Spain.

During the meeting – also attended by Prime Minister Manuel Marrero Cruz and the Minister of Culture Alpidio Alonso Grau – a report was presented on efforts by the each of Uneac’s art-form associations since the Congress, in the midst of a pandemic that has limited all interaction, and a fruitful discussion of national culture and recent attacks on the country’s institutions.

Farah Maria in the Memory of That Long Journey

Díaz-Canel– The President asserted that culture is being attacked because it is the very essence of the Revolution, and the goal of colonizing platforms is to destroy our identity, in hopes of dominating us. But in the history of Cuba, with rare exceptions, intellectuals and artists have always supported the most advanced causes, that is why the Revolution, he reiterated, «has been sung and recounted by its artists.»

Díaz-Canel emphasized the unity that characterizes Cuba’s intelligentsia and rejected attempts to portray it as fragmented. He advocated continuing, and making visible, the dialogue taking place every day with the country’s cultural institutions.

Prestigious writers and artists spoke of their commitment to Cuban cultural institutions; their defense of the nation’s cultural policy which, despite the errors made at times, has allowed for an explosion of artistic expression since the triumph of the Revolution; and of the critical nature of Cuban art, promoted precisely by institutions, thanks to ongoing, permanent dialogue.

At the same time, calls were made for more rapid progress in making transformations needed in several cultural institutions, as has been legitimately demanded; as well as better application of knowledge emerging from the social sciences; and deeper study of the Constitution in the country’s educational system.

For more than two hours, the intellectuals and artists discussed various topics with the President.

First of all, they addressed the most recent media lynchings of those who defend the Revolution on social networks and in public events, and the courage of those who insist on doing so, despite the cost; the need to strengthen our organizations, some of which are still mired in old patterns, and the need to counterpoise the nation’s authentic cultural heritage to the apocalyptic picture our enemies attempt to present as reality.

The consistently revolutionary discourse of the Cuban intelligentsia was once again present at the Presidency of the Republic’s headquarters, in a now customary discussion with the President, who, in December of 2019, called on Uneac to be more proactive at the grassroots level and actively challenge the lost cause of our enemies, referring to Don Quixote’s battle against windmills, “as old as they are harmful.»