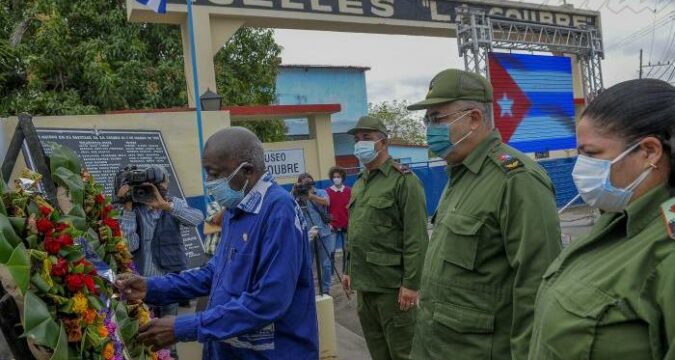 On March 4, 1961, during the commemoration of the first anniversary of the sabotage of the French steamship La Coubre, Comandante en jefe Fidel Castro Ruz stated:

«When the ship La Coubre exploded, leaving that Dantesque toll of workers and soldiers torn apart by the criminal sabotage, our enemies were warning us of the price they would demand of us; but they were also teaching us that no matter how dear the price they would force us to pay for the Revolution, they were willing to force our people to pay a much more expensive price for wanting to make a revolution.»

In memory of the hundreds killed, injured and orphaned by the explosion on that Friday in the month of March, 1960, yesterday morning Party and Havana government authorities gathered at the La Coubre Docks to honor the victims.

Alongside the plaque located at the site, engraved with the names of those killed in the infamous terrorist act, was surrounded by five floral wreaths in honor of the victims, on behalf of Raúl Castro Ruz, first secretary of the Party Central Committee; Miguel Díaz-Canel Bermúdez, President of the Republic; the Council of State; the Council of Ministers; and the Port Maritime Transportation Enterprise Group.

Cuba,. Foreign Minister Bruno Rodriguez said on Monday that the US president and the secretary of State are deliberately lying when they call Cuba a sponsor of terrorism.

Cuba- On his Twitter account, the head of Cuban diplomacy added that this is an infamy used as ‘currency for the payment of political debts’, in addition to becoming an instrument of coercion for nations that do not bow to the whims of imperialism.

On January 11, the White House included Cuba again in the list of countries that allegedly sponsor terrorism, a decision that was described as a cynical and hypocritical act in a statement from the Cuban Foreign Ministry.

Cuba was excluded from that group in 2015, during the process of rapprochement with the United States under the mandate of President Barack Obama (2009-2017), so many people attribute that action by the Donald Trump administration to his intention of imposing additional obstacles to any prospect of recovery in bilateral relations, after Democratic President-elect Joe Biden takes office.

Several countries, organizations and renowned figures have rejected the inclusion of Cuba in the unilateral list drawn up by the United States, and recognize in their messages and statements Cuba’s position in condemning terrorism in all its forms.